Code signing is a security key and private essential quality that is required in OS X, to certify your app. The properties installed by this code signing is that if you signed in the application once in your system, then the signing certificate should be able to detect the regarding change of the app. This kind of change may occur by malware code or by accidentally. Code signing certificate is basically the form of a digital authentication that justify one’s entry. The code is designed in the manner that it keeps tracking the individual information which is digitally interlinked with that security key.

Internet has become all invasive platforms. With increase in smart phone users, most of the online activities have shifted to devices like phones, tablets or laptops as users rely on these. However, most of the users are plagued with the question whether it is safe to use internet on the phone due to increased accounts of malware and spam attacks. Viewing content on the internet means downloading applications; plug ins, tools, scripts, macros and more forms of data, any of which could be malicious. 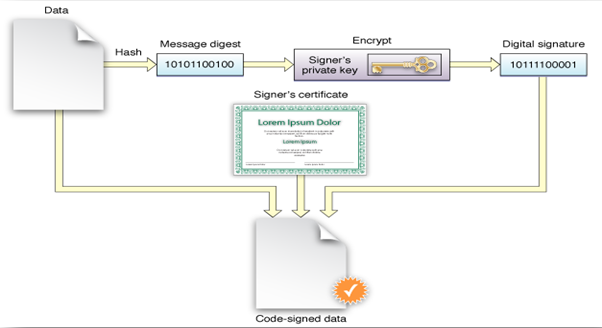 The computer giant Microsoft has presented an innovative solution to this problem by introducing the concept of code signing and certification with the help of modern digital signature technology. Code signing has been defined as a technique used by software developers to digitally sign the downloadable codes they provide for the purpose of providing the credibility of the code. People, using Apple devices are not be able to operate unauthorized programs in that. The iOS system is extremely efficient at detecting alliance to trusted certificate vendors like Thawte Code Signing Certificate. While Symantec Code Signing Certificate is reasonably priced and comes with great features like unlimited renewal, validity options and money back guarantee. Comodo Code Signing Certificate provides infrastructure security for applications using Java, Mozilla Firefox, Apple Mac, Microsoft, etc.

Elements of a code signature:

When the device browsers search for the code, they come across this signature, which they compare against the original signature of the manufacturer and verify the two. If matched, the browser automatically downloads the controls or codes because of the established trustability. In case the code does not match, it might mean that the code has been tampered with and a warning is displayed on the browser screen to inform the user about the potential threat so that they can decide whether to download or not. However, there is nothing preventing users from downloading the content even if the code signing does not work.

Sometimes, there are a certain set of criteria specified by the signer while providing a code signature, which are termed as code requirements. This is written in the technical language and has a script format that includes conditions to be met for the code to be accepted. The process of evaluating whether the signed code meets the requirements is executed only when the operating system needs to determine whether to run a code or not. These can be internal requirements, designated requirement, etc. Obtaining the code sign certificate requires the generation of a private or public key pair as well as documents establishing the identity of the developer. This should be submitted to security companies dealing with issuing certificate who take care of the verification process.

Why should you prefer code signing certificate:

Buy Apple Code Signing Certificate at Only $59 Per Year